Also visit my Photography by DonnaKay blogspot @ http://photographybydonnakay.blogspot.com ... a little more about my life as I grow my photography business...
More and more often lately I find that time has passed by and I've neglected to write on this blog!  It's definitely not from lack of things to write about.  I'm sure I've mentioned that my life has been full of excitement throughout.  So in the middle of this particular night, since I can't sleep, I'll tell you a story.  First, though, I need to give you a tiny bit of history.  I am married to my 2nd husband... he adopted my 3 kids very soon after we were married.  But the story I'm going to tell you is about a time when I was still married to my first husband.
I was close to 7 months pregnant with my 3rd child - my daughter.  And my two little boys were still very young - probably about 15 months and 36 months at the time.  At this time my brother and his wife were not married yet - and I believe they might have been broken up for the moment.  Continue reading and you'll see why I even mention that fact.  Ok... 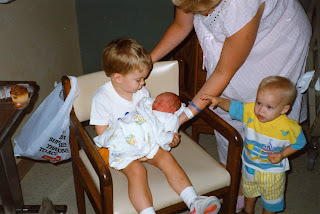 It was the middle of the night, and everyone was sound asleep.  Sleep was definitely a precious thing to me at this point in my pregnancy.  My belly was huge, and I probably looked like I was delivering triplets at any moment.  At least, that's how many people acted!  But seriously, I was miserable.  My back and hips hurt, and sleep was almost impossible simply because I couldn't find a comfortable position to lay in when I would go to bed.  But this night I was asleep.  All of a sudden the doorbell was ringing like crazy!!  Now you would think my concern would be for who would be ringing my doorbell in the middle of the night - but I was almost 7 months pregnant with two other babies who I did NOT want woken up in the middle of the night!  So I got to the front door fast.  My husband was right there behind me, trying to tell me not to just open the door.  I figured it had to be my brother - that maybe he and his girlfriend had been fighting or something.  We had those little windows down the side of the front door - so I pulled back the little curtain that was over the window and flipped on the front porch light.  Only, I didn't see anyone standing there - and certainly didn't see my brother.   But the doorbell continued to ring.  So I started peeking out the edge of the window, trying to see what I was missing -- see if someone was in the blind spot that would have been directly in front of the door.  What I saw was a man kind of sitting all leaned up against the front door - with his arm up just hitting the doorbell over and over again.  Now the odd thing was that we didn't live in some busy apartment complex, or somewhere in a bad neighborhood that something like this would be going on.  Rather, we lived in a very quiet neighborhood that never really saw any excitement.  Anyway... I wanted to open the door and beat this man who was ringing the doorbell - and kept trying to make him understand through the window and door that I was not going to open the door - and to please stop ringing the bell.  Then I grabbed the phone and called 911.  Not too long after they answered and I explained what was going on they said, "Do NOT open your door or go outside.  Stay away from your doors - make sure they are locked."  Apparently the Sheriff's Dept was looking for a man who had been in an argument and had gotten shot and then run off... and guess where he had ended up?!!  Now the man wasn't from our neighborhood - but it wasn't too far outside of it and he had just come down through the trees into our backyard.  We had a gate on our back porch to keep the boys on it when they were playing - and after all was finished up we figured out from the blood trail that this man had tried unsuccessfully to get on our back porch.  What a blessing that he wasn't able to figure out the latch.

Well, there I was on the phone with dispatcher at 911 - and I started having contractions.... probably from all of the adrenaline going on over the situation.  But pretty quickly I was very uncomfortable, and breathing a little faster.  So the dispatcher asked me if I was okay, and I mentioned that I was almost 7 months pregnant.  That was maybe not the best thing to tell them, because then they were sending out another ambulance to check me out as well!  Just great!    It wasn't too long before we had firetrucks, 1st responders, Sheriff cars and even some unmarked cars all in our driveway -- and very soon even a couple of ambulances... and they quickly got the shot man loaded up and were on their way with him to the hospital.  They wanted to take me in to the hospital to be checked out since I was having such hard contractions, but I wouldn't hear of it.  My little boys were asleep, and I knew they would be very alarmed to wake up and find me not there... so I opted to just stay home.  Everything there turned out fine - it absolutely was just the over excitement of the nights events.  Apparently the man lost part of his leg since he was shot at pretty close range with a shotgun.  The man who shot him - well, I'm not really sure what ever happened to him!  But the woman they were fighting about -- I think she was history after all of that!
I'd love to hear some of your stories sometime!  I find it so interesting some of the things other people go through in just their normal little lives.  I know mine has always had plenty of events that seemed too strange to even be real.
I hope you have a GREAT Saturday - and a wonderful weekend!!
Posted by Unknown at 3:00 AM