This weekend we celebrate Father's Day.  Growing up it was that day that we either got my Dad a new shirt or a necktie... and it seemed like often it would also be the week we were on vacation at the beach.  But even though it's Father's Day, it's actually not my own Dad that I want to talk about.  Rather, it's my Granddaddy.

I was fortunate enough to grow up having both complete sets of my grandparents until just a few years ago.  While I loved them both, my maternal Grandparents were the light of my life -- and I knew I was the light of theirs.  I was the first grandchild for them - and for some reason, I thought I was given rule of the kingdom when I was born.  It never occurred to me that anyone could ever knock me from my place with my Grandparents.  Growing up, I spent every possible bit of time with them - often spending most of my Summer at their house in South Carolina.  I can remember so many stories of my time with them, most of them bring such a smile to my face.  But something particular that makes me smile while writing this is remembering my Granddaddy - and how I was Granddaddy's girl.  He always had a special name for me - either Granddaddy's babygirl, peachie, or something... and even until the last few years there were times I would call him on the phone just to hear him say "Is that peachie?" or "Is that the babygirl?"  No matter what might be bothering me, those words and his voice were enough to melt any problems away.  My Granddaddy is a World War II veteran - in fact, he was away in the Army when my Mom was born.  She was several months old when he came back and met her for the first time.  And when she grew up and married my Dad and then was expecting me, my Granddaddy was still a very young man -- actually quite a bit younger than I am as I write this now!  Initially I don't think he was too keen on the idea of being a Grandfather -- but the moment he saw me, I think that all went right out of his mind.  It was love.  I have so many memories from when I was growing up with my Granddaddy of the special things we did together...he taught me how to fish, how to tell time and make change, and how to row a boat.  He had retired from the military by the time I was little and ran a 76 gas station right outside the post in Columbia, and often he would take me to work with him.  He would let me pump gas, wash car windows and then would have me make change.  He said those things were important for me to know.  I could always convince him to let me skip my regular naptime when I was 5-yrs-old or so, and just let me lay on a blanket near the pool, and he would sit right beside me to make sure I was safe.  Of course, I would always go right to sleep.  I LOVED slurpees, and he knew that all too well, so he would promise me one every day. I can remember one day in the hot summer in South Carolina, and he had promised me if I was patient while he was running his gas station that morning, that when we left he would get me a slurpee on the way home.  That was all I needed to hear!  So when it was time to go, I didn't even need to remind him of his promise... he went straight to looking for a slurpee.  Well, it was a very hot day, and for some reason place after place had no slurpees, only a broken slurpee machine.  Thinking back it seemed like we went to a dozen places.  I remember him waking me up as I had fallen asleep in the truck - and he had finally found a place that had a working slurpee machine.  He was so excited that he didn't have to let me down!  He would never have let me be disappointed.  One of the things my Granddaddy loved was for me to sing him the Granddaddy song.  I'm pretty sure he had made this song up, and he taught it to me as a little girl.  I would sing at the top of my lungs "Granddaddy, Granddaddy, how I love my Granddaddy..." on and on.  As I grew up and older, Granddaddy and I were always close.  It was different than my relationship with my Grandmother, with him it was as if I never really had to grow up.  It was a relationship of just being adored - and adoring him back. 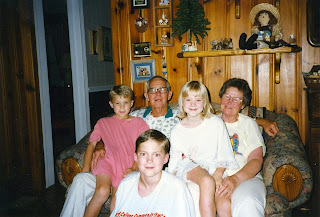 (my Grandparents with my kids - this is probably 15 years ago)
In January of 2002 my Grandparents were in a car wreck on hwy 601 right outside of Concord, NC.  My Grandmother was driving - and I believe with all of my heart that she knew there was no way she was going to make it through the wreck she saw coming at them.  A young man (21-yrs-old) had fallen asleep in the company truck he was driving, crossed the line and came right at them.  She got as far off the road as she could, but there was nowhere else for her to go.  She died on impact.  In some ways, my life has never been the same.  (But this blog is about my Granddaddy, so I'll leave that part of the story to another day.)  In every way, my Granddaddy has never been the same.  He and my Grandmama were married for over 55 years (getting closer to 60, I believe) and they were married while they were really still kids themselves.  They had raised 3 kids, gone through 5 pregnancies (she lost 2 of them at birth), had gone through separation from his time serving in the war, sicknesses, losses, happy and sad times.  But they were always there together.  And watching him the last few years with her gone has been the most painful thing.  He often doesn't even resemble my Granddaddy any more - and I don't feel like "Granddaddy's babygirl" any longer.  The happiness went out of him when she died.  It makes me so sad.

So this Father's Day, my wish is that God will remind my Granddaddy that he is important to many people who are still on this earth -- and that he has made a huge difference in many people's lives through his life --- especially one girl who loves to hear "Is that you peachie?"  We never quite know what other people go through in their lives.  We can't understand how loss or hurt affects others - only how we are affected.  But if you have ever experienced anything like this, try to remember the good times.  And when the times are a little rougher, hold onto those memories the tightest. 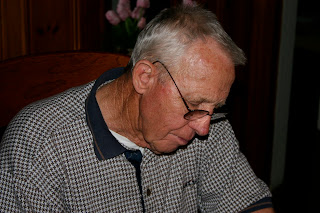 (This is a picture of my Granddaddy - this is a couple of years after my Grandmother died.)

Also visit my Photography by DonnaKay blogspot @ http://photographybydonnakay.blogspot.com ... a little more about my life as I grow my photography business...
Posted by Unknown at 8:52 PM